1-on-1 with Chris Stirewalt. Fired from Fox for calling an election right and now offering industry insights with his new book: Broken News.

An "E&P Reports" with Mike Blinder

Before joining Fox News, Chris Stirewalt served as political editor for the Washington Examiner. As a top editor and election forecaster for Fox News’ decision desk during the 2020 election, Stirewalt stood firm to defend the network being the first to correctly call Arizona for Joe Biden on election night — the first sign that Donald Trump would lose the 2020 presidential race. What resulted was a backlash from Trump, his supporters and even calls for his being imprisoned as part of an election fraud conspiracy.

In his latest book “Broken News: Why the Media Rage Machine Divides America and How to 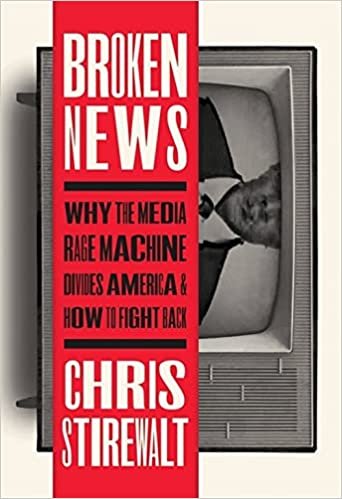 Fight Back,” Stirewalt states that some news organizations (like Fox News, MSNBC and others) have developed a philosophy of fanning the anger within their core audience in what he calls “rage revenue” practices that leans towards bias coverage that helps stoke the political division and culture wars within the U.S. In “Broken News,” Stirewalt offers some inside insight into these news operations about how they reward this form of coverage because it is easier and more profitable than investigative journalism.

But all is not lost because not only does “Broken News” point out the problems within the news industry, but it also offers the reader a solution to become better news consumers for the sake of the future of our democracy.

In this 155th episode of “E&P Reports,” we go one-on-one with Chris Stirewalt, Senior Fellow at the American Enterprise Institute (AEI), contributing editor for The Dispatch and author of his new book, “Broken News: Why the Media Rage Machine Divides America and How to Fight Back,” where he writes about his time as the top political editor and election forecaster for the Fox News channel and how he became famous (and subsequently vilified) for being the first to correctly call the 2020 election results for the state of Arizona in favor of Biden. Stirewalt offers some inside intelligence and perspective on how the biased reporting of news media outlets like MSNBC and Fox News channel are helping divide our country and advises on how we, the news consumer, can help find some common ground.

“He runs one of the largest media operations you’ve never heard about.” Meet Kevin Dilley

#NewsMedia Industry News
Chicago Sun-Times introduces digital membership program
The Chicago Sun-Times has dropped its paywall with the debut of a membership program.
How a Las Vegas newsroom set out to solve a colleague’s killing
After Jeff German of the Las Vegas Review-Journal was found dead, his fellow reporters knew they would have to investigate his death before they mourned it. Now a suspect is behind bars.