Full disclosure: I live in a purple state (Florida) but in a very “deep red” area. As society became more polarized following the 2016 election, I conducted my own research on news consumption by simply counting television screens that were playing CNN versus how many more were playing Fox during flights back to Tampa, or seeing how the TVs at Tampa International Airport lounges were always set on Fox News, or hearing my church family (when discussing politics) parroting ideas that more likely came from a Sean Hannity than a Rachel Maddow. During the early days of the pandemic, when all were seeing New York in crisis, Fox News would parade my governor as a perfect example of how to mitigate COVID-19 since our numbers were low. Even the Republican Party planned to move their convention to virus-free Florida.

Then, as we all know, shortly after Memorial Day, Florida became one of the new “hot spots” with high cases, hospitalizations and death counts. I also noted that many of my fellow Floridians were ignoring this once-in-a-generation crisis by not wearing masks or social distancing. Stores were not enforcing it, and I was sometimes looked at as a “liberal agitator” when I went into a business with my mouth and nose covered.

There are some who blame the president and my governor for this societal deprioritizing of the logical, scientifically based guidelines we should adopt to safeguard our fellow citizens, regardless of age, ethnicity or political persuasion. However, as someone who constantly consumes all sides of media, (watching all networks and reading both left and right news sources), I started to realize that the dominant news network of my red region, Fox News, was sharing the blame by providing cover to those politicians who decided to politicize cold, hard, undisputable scientific fact by not making the pandemic a forefront issue to their audience. In short, they were “playing it down.”

It is for that reason we commissioned in July an independent study to simply record over a six-week period how much time was being devoted to the pandemic on the two top major news outlets: CNN and Fox News. This story is the result.

It is hoped that we news publishers will remember that we have a responsibility to sometimes dismantle the “echo chambers” we constructed around our viewers and readers for the greater good. Amplifying political views is one thing. But avoiding the reporting on the importance and realities of scientific fact is nothing more than wanton negligence.

Mike Blinder is publisher of Editor and Publisher and can be reached at mike.blinder@editorandpublisher.com.

President Donald Trump purposely downplayed the seriousness of COVID-19 back in February, according to Watergate journalist Bob Woodward. The revelation came while Woodward was promoting his new book, “Rage.”

Why would the president downplay something that would eventually infect nearly 7 million Americans while killing 200,000? Consider where he gets his information.

Trump is an admitted Fox News fan. Yet Fox News gives less network coverage to the pandemic than other networks like CNN. That’s what Editor & Publisher  found during an informal six-week study of the two networks.  E&P  staff watched the same hour of weekday morning programming on each network and counted the minutes of coverage they dedicated to the pandemic. Fox spent a little more than 150 minutes of 1,800 minutes of programming on pandemic-related stories. By contrast, CNN spent 627 minutes. 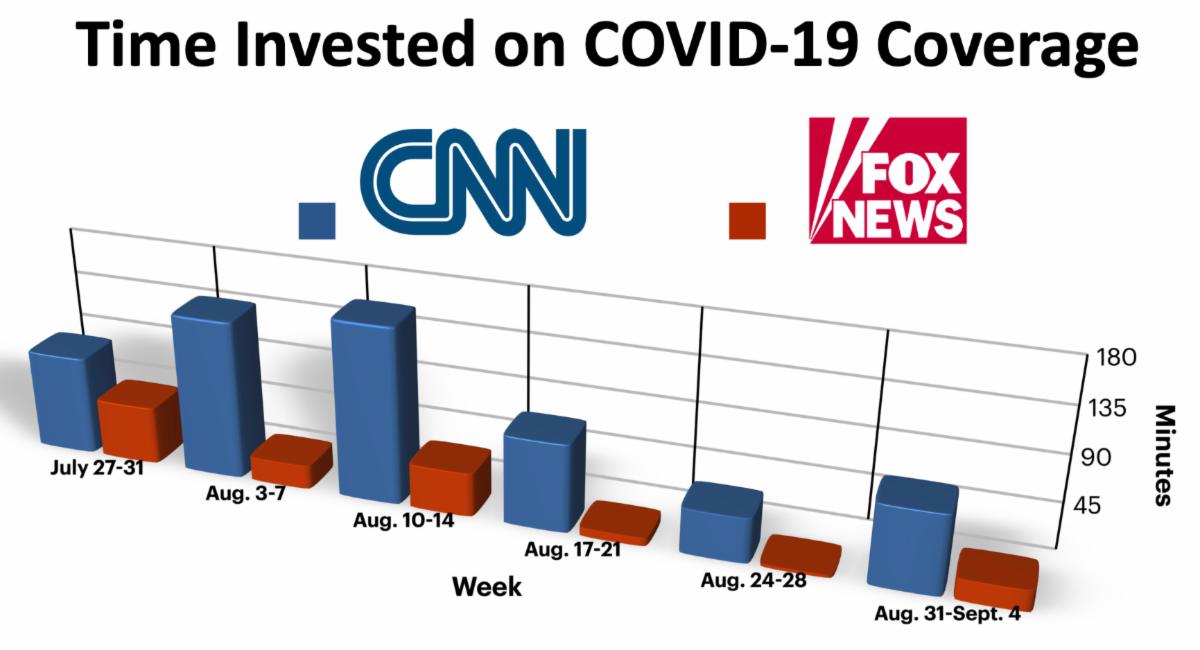 The coverage is more equitable online as Fox had 331 headlines on the pandemic while CNN had 372 headlines during the same six-week period. Seeking stories online requires more active consumption than watching a newscast.

“The real problem is these kinds of cable news outlets treat news as entertainment or some kind of partisan contest instead of news as news,” said Wayne Garcia, a journalism instructor at the University of South Florida and a former journalist. “They’re all highly reactive and inordinately controlled by the agenda that seems to be set on Twitter.”

While correlation does not imply causation, the confirmation bias each network provides its viewers is reflected in the politicization of the pandemic and the response by the public and respective parties. GOP candidates are campaigning in person and the President Trump continues to hold rallies attended by mask-less supporters. Democratic candidates have done more virtual campaigning and their supporters are clamoring to vote by mail to limit exposure to the virus.

In His Own Words

During a Sept. 10 press briefing, Trump ticked off the Fox News programming he watches.

“I watched Liz McDonald. She is fantastic,” Trump said. “I watched Fox Business. I watched Lou Dobbs last night, Sean Hannity last night, Tucker (Carlson) last night, Laura (Ingraham). I watched ‘Fox and Friends’ this morning. You watch these shows, you don’t have to go too far into the details. They cover things.”

CNN host Brian Stelter just released a book on this topic called “Hoax: Donald Trump, Fox News and the Dangerous Distortion of the Truth.” During a recent appearance on “The View,” Stelter called it the “Foxification of America.”

“Donald Trump has convinced one-third of the country not to believe anything but Sean Hannity and Fox and Trump,” he told the hosts. “The people who don’t watch Fox, they’re still affected by what Trump hears on Fox because we’re all talking about it. If the president was being informed properly with the highest-quality information from the best journalists in the world, then I wouldn’t have written a book.”

The week of Aug. 24, when more than 1,000 Americans died each day from COVID-19, Fox News gave 2.5 minutes of coverage to the pandemic. That is less than 1 percent of the 300 weekday minutes it aired between 6 and 7 a.m.  CNN dedicated 42 minutes, or 14 percent of those minutes to the virus.

What the Audience Sees

Patrick McGee of Nashville, Tenn. describes himself as “a patriotic, law-abiding citizen.” He plans to retire next year after spending 43 years with AT&T as an electronic switching technician. McGee says he watches Fox News about 20 hours a week “because of its conservative lean.”

“Fox is giving the facts about where we are with the virus,” he said. “CNN is spending a lot of time trying to blame Trump for the virus.”

The top three issues facing America, according to McGee, are corruption in government and the FBI’s interest in keeping Trump from being reelected; the way “white privilege crap” is changing the country; and how “they” are trying to eliminate and change American history

Lynne Marks Semmel said she spends about the same amount of time—20 hours—watching CNN. Semmel calls it her “number one news source.”

“While CNN is a little left-leaning, I believe they do the research before reporting,” she said. “Fox wants to play to Trump’s base.

Semmel, a retired insurance underwriter who splits time between Trenton, N.J. and Naples, Fla., said the top three issues affecting Americans today are the administration’s mishandling of the coronavirus; Trump’s disdain of the military and the postal service; and Russian interference.

The priorities for each viewer reflect the time their respective networks spend on covering the pandemic. That bothers Garcia.

“It’s concerning for any citizen of the country who is getting very limited, algorithm-driven view that is designed to do only one thing on the right or the left to support what you only believe,” he said. “It’s more troubling that any lawmaker or leader is making decisions based on an entertainment show and not the facts of the world.”

Sean M. Wood is a freelance writer and editor and owner of Three 8 Communications. He spent 19 years as a print journalist and was a senior business reporter for the Fort Worth Star-Telegram and the San Antonio Express-News.