What I find exciting about this particular study about person-centered language is that it’s a really small thing — a really small change that actually does have an impact on people and does move the needle on trust in journalism.”
Caroline Murray, a senior research associate at the Center for Media Engagement in the Moody College of Communication at The University of Texas at Austin and one of the authors of the “person-centered terms” study
Victoria Holmes | for Editor & Publisher

A report published by the Center for Media Engagement in the Moody College of Communication at The University of Texas at Austin shows how journalists can connect with stigmatized communities by using person-centered language. Caroline Murray, a senior research associate at the school and one of the authors, says this research is important because it demonstrates how journalists can better connect with the communities they cover.

“What I find exciting about this particular study about person-centered language is that it’s a really small thing — a really small change that actually does have an impact on people and does move the needle on trust in journalism,” said Murray.

The small change that Murray calls on journalists to implement in their writing is to strike out common, stereotypical labels. For example, instead of saying “drug abuser,” one can write “a person who struggles with substance abuse.”

Murray gives a direct example to illustrate this style of writing.

“So the essential part of it would be putting a person’s humanity first. And by that, I mean literally having the word ‘person’ or ‘people’ before any descriptor of whatever experiences they may have had, or whatever condition they may be in at the moment,” said Murray. 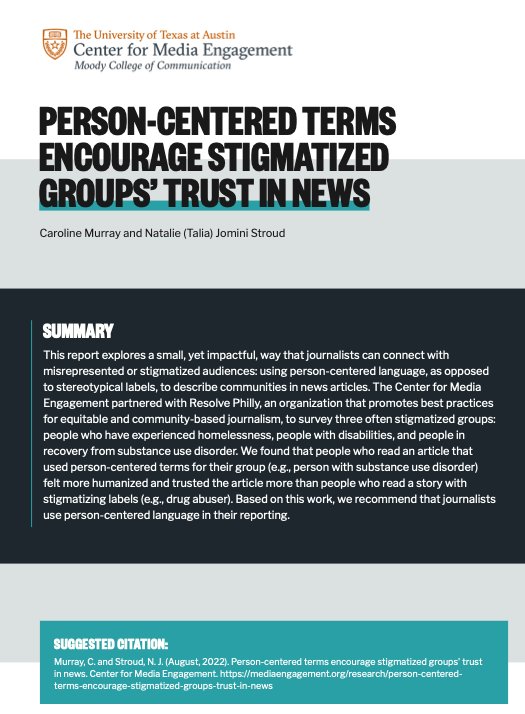 The report is based on responses from people in stigmatized communities who read various news articles. Respondents then answered questions about how much they trusted the news article and its author, their intentions to engage with the article, and how well it represented their group. Murray explains why person-centered terms in writing are effective.

“It was more about acknowledging that people have multiple identities. There’s not just one that grounds them in this world. And person-centered language is a way to acknowledge that and to bring some complexity to descriptions for people,” said Murray.

This type of writing is not new to some newsrooms, but the research on this type of language is. Murray’s study shows that people who read an article that used person-centered terms for their group felt more humanized and trusted the piece more than people who read a story with stigmatizing labels. It also revealed that people in recovery from substance use disorder felt more accurately represented by articles that used person-centered terms instead of stigmatizing terms. These findings can help journalists develop meaningful relationships to tell stories accurately. Murray received her undergraduate degree in journalism and said she was inspired to do this type of research to create solutions.

“I really liked the idea of rigorous testing of ideas and how we could test solutions so we could be informed about the best way to approach these really pressing problems,” said Murray.

Murray said she has just entered graduate school and has ambitions to pursue different topics.

“I would say that a lot of our other work right now is focused on political conversations and how we can make those less toxic … And then also, how in local news environments, how good are local news stations? Are they matching the interests of their community?” said Murray.

Murray hopes that her research can help newsrooms implement small changes that are valuable and effective.