Pluribus News shines a spotlight on all 50 statehouses

The digital news startup aims to inform an audience of tens of thousands of state legislators, policy experts, lobbyists and staff

The decimation of the state legislative press corps is, first of all, terrible for democracy, but it’s also an opportunity for us to hire freelancers who have experience covering Sacramento or Des Moines or Tallahassee — someone who knows who the players are.”
Reid Wilson, founder and editor-in-chief, Pluribus News
Gretchen A. Peck | for Editor & Publisher

“Politics is in my blood,” Reid Wilson told E&P. After an accomplished career as a journalist, working for titles like The Washington Post, The Hill and National Journal’s The Hotline, Wilson founded Pluribus News in October. Building on his experiences covering state politics and policy, Wilson’s ambition is to expertly cover all 50 statehouses with a website, e-newsletters and branded events.

“It struck me that as the newsletter space has taken off in recent years, we could make a marketable product that is going to be appealing to the audience that I love talking to, who are legislators and public policy leaders, and do it at a high level, with substantial quality and without the need to chase after clicks,” he explained.

He consulted with friends in advertising and public relations and amassed the seed money to launch a website and newsletters, with content from the in-house team and a nationwide bullpen of freelancers. The full-time masthead includes four reporters and two editors, including Wilson.

He recounted for E&P a time when he worked as a Washington Post journalist in California and attended a press briefing in Sacramento. He arrived with a buddy from the L.A. Times and saw that each seat had a placard reserving it for a particular news outlet. But there wasn't one for The Washington Post. His buddy told him, “Sit wherever you want because 70% of these outlets either don’t exist anymore, or they don’t send somebody to Sacramento anymore.”

“The decimation of the state legislative press corps is, first of all, terrible for democracy, but it’s also an opportunity for us to hire freelancers who have experience covering Sacramento or Des Moines or Tallahassee — someone who knows who the players are,” Wilson explained. 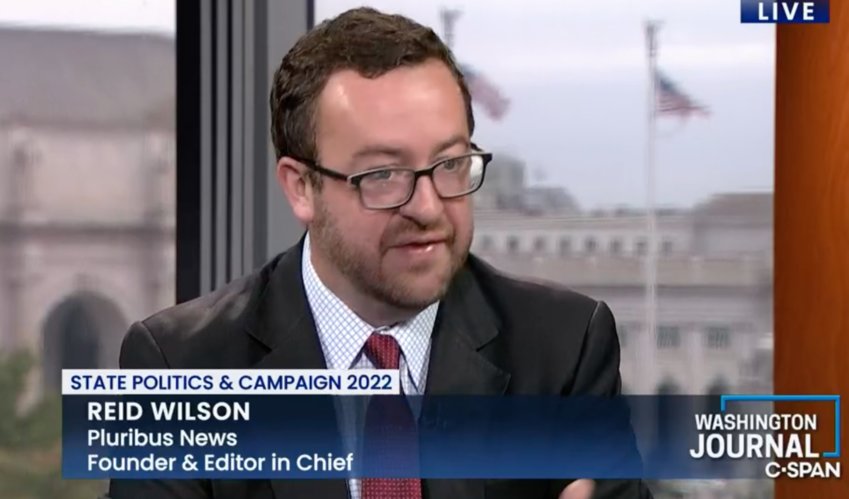 Reid Wilson, founder and editor-in-chief of Pluribus News, appeared on C-SPAN in early October to talk about the state-level midterm elections and news from state legislatures across the country.

Pluribus News’ potential audience ranks in the tens of thousands. Wilson estimated that there are state legislators across all 50 states and approximately 12,000 legislative staffers. They’ll also target executive offices, from governors to commissioners.

“There are also 50,000 state registered lobbyists across the country who need to know what is happening on their beats and on behalf of their clients, and about 40,000 corporate and government affairs professionals — P.R. types — who will want this information,” Wilson said.

They’ve built their audience through personal outreach and networking, Twitter advertising and email marketing campaigns. By virtue of Pluribus News’ audience, Wilson is especially cognizant of objectivity and fairness.

“Hopefully, I’ve built a reputation as someone who just wants to tell the story,” he said. “I’m conscious of who my audience is. These are people with Rs and Ds after their names, and if I make a liberal or conservative argument, I’m shutting off half my audience.”

To start, the team will cover stories through a policy lens related to politics, the economy, energy, healthcare, the environment, taxes and disruption.

“We have a reporter writing a story right now about leadership changes in the Arizona legislature because that’s going to tell us a lot about the future direction of one of the states that has become the vanguard in conservative policy,” Wilson said.

Though the public will certainly find Pluribus News informative and compelling, the site and newsletters are expressly authored with policymakers, staff and lobbyists in mind.

“There’s always something to write about in the states because they are all experimenting so much,” Wilson said.

“Within a week, bills were in 20 to 30 states after those issues popped up on Fox News,” he recalled.

And what happens at the state level typically “bubbles up” to federal legislators.

“Think about welfare reform in the ‘90s, a project of four Republican governors in the Midwest. Bill Clinton made it into his signature domestic achievement,” Wilson said. “The Affordable Care Act started as Mitt Romney’s baby in Massachusetts — but don’t tell him that — and then it became the foundation of Obama’s legacy. The one big bipartisan thing that Trump did was criminal justice reform, which started — if you can believe this — as a joint project of the Koch brothers and George Soros in states like Oklahoma, Kansas and Texas.

“That’s how state policy moves up the ladder. The foundation of the next president’s legacy is probably on the floor in some state legislatures this year,” he added.

What may surprise national political reporters (and the rest of us) is that there’s a lot less partisan animosity in statehouses than in the nation's capital. And legislatures are generally amenable to talking to Pluribus News reporters, especially if they're proud of a new idea or legislative achievement.

“If they have a really cool idea, they want to talk about it, and forgive me for sounding ‘8th-grade civics-ish,’ but that’s really refreshing,” he said.

“Ninety-nine percent of the time you hear about a state legislature, it’s when they’re doing something crazy. Right? What they actually do is the business of governing. Most states have balanced-budget amendments, which means they have to pass something every year, unlike Congress,” Wilson noted.

There’s a long-held belief that “all politics is local,” and the same can be said for public policymaking.

“When Congress does something, like pass a transportation bill, it’s not as if Secretary Buttigieg … is spending the money. What these programs do is send all the money to the states, and then the states spend the money,” Wilson explained. “When you look out your window and see a pothole in the road that needs to be fixed, you go to your local government or state representative. … I don’t think it’s too hyperbolic to say that your state representative, your state senator — who maybe you’ve never heard of — has a bigger impact on your daily life than a member of Congress, your United States senator, maybe even your president.”