As proposed legislation moves forward in the Senate and House, big tech begins pushing against news publishers seeking a seat at the negotiation table

By legislative measures, the Journalism Competition and Preservation Act (JCPA) has a rather narrow goal — to give news publishers a finite time period to collectively bargain with the two largest platforms, Google and Meta/Facebook — without the threat of antitrust prosecution — to reach an agreement about content usage and fair compensation. At the end of that period, if the parties have not reached an agreement on a shared revenue model, arbitrators would impose a fair-market agreement. It is a legislative remedy to a problem that will otherwise persist without it, and it’s as simple as creating an environment by which all the parties can begin to make their arguments and negotiate the terms of their future relationships.

Senator Amy Klobuchar (D-MN) introduced the JCPA in March 2021 with Senator John Kennedy (R-LA), and she co-chaired the February 2, 2022 hearing before the Senate Judiciary Subcommittee on Competition, Policy, Antitrust and Consumer Rights, a subcommittee she chairs — to debate the JCPA before it’s “marked up.” Klobuchar opened the proceedings by invoking the memory of her father, a newspaper reporter. She estimated that he'd written more than 8,400 columns — 12 million words — over his long career. He interviewed American icons like Ronald Reagan, Ginger Rogers and Chicago Bears Coach Mike Ditka. 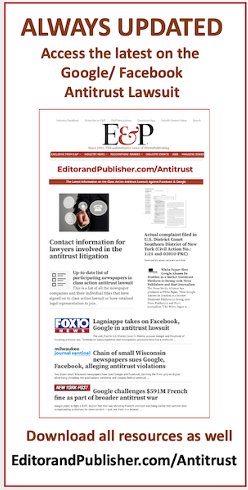 Senator Klobuchar lauded local news reporters who cover stories like catastrophic floods, city councils, local sports, schools and local community events. “All this brings the community together in different ways. … What our local news does is, oftentimes, tell a story of what my Dad called 'ordinary people doing extraordinary things.' And as I said, this work not only connects communities it also helps policymakers better understand how issues are impacting their constituents and helps them to figure out what needs to be done. That's why it's critical that we ensure that local news can not only survive but thrive — particularly as outlets face off with some of the biggest companies the world has ever known. Local news is facing a crisis in the United States," she asserted.

The chairwoman cited some supporting data: the thousands of news outlets shuttered since 2005 and the case of news publisher’s revenues plummeting at precisely the same time platforms took control of the digital ad markets.

“These big tech companies are not friends to journalism,” Senator Klobuchar said during her opening statement. “They are raking in ad dollars while taking news content, feeding it to their users, and refusing to offer fair compensation.”

President and CEO of Pittsburgh-based Trib Total Media Jennifer Bertetto gave testimony supporting the JCPA. With a legacy dating back to the 1800s, the news publisher employs 272 — 88 in the newsroom, she said. It produces daily and weekly newspapers and hyperlocal community websites. The media company’s high-quality journalism attracts 300 million pageviews each year to its flagship site, TribLive.com, she reported.

“Our readers — again, being a small publisher in southwestern Pennsylvania — rely on 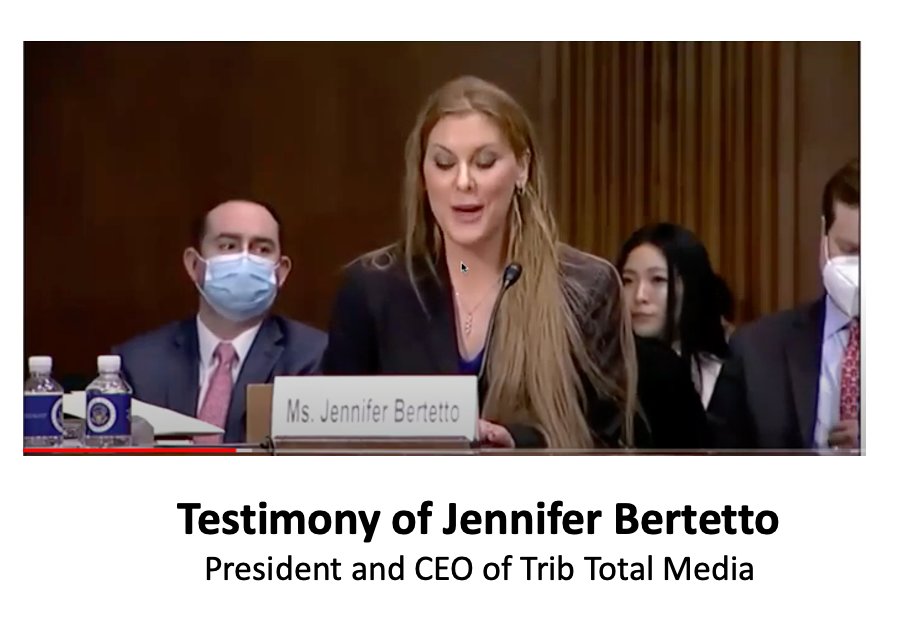 for the information they are literally not going to get anywhere else. So, that is covering school board meetings; that is covering city government; that is letting them know when the bridge is out in their community; that is letting them know when the senior-citizen center is going to be open during the cold winter months as heating stations. We often provide that very content, as well, to the television broadcasters,” she explained to the subcommittee.

Bertetto reported that it costs her company $7 million a year to staff its lean newsroom, but they only bring in an estimated $144,000 a year from Google-derived revenue.

What would a more equitable revenue share do for her news organization?

Bertetto said, “I could cover more communities. I could add beats. I’m presently making decisions every single day about which communities we can afford to have a reporter in on a full-time basis and where we have to decide to have a part-time reporter or no reporter at all. Any additional economic relief to help me avoid those decisions would certainly be welcome."

At WTOP News in Washington, DC, General Manager Joel Oxley told the Subcommittee that he’d invest in journalism, too, if the JCPA compels big tech to come to the negotiating table. Oxley reported it costs $12 million a year to fund WTOP’s journalism, with a newsroom unable to grow while the population of the community has doubled in recent years.

“Even more concerning is the degree to which certain platforms commoditize news content, with little regard for the quality and veracity of the story. This puts fact-based reporting like ours on par with unsubstantiated clickbait as we fight for user eyeballs in both platform news feeds and search results,” Oxley told the Subcommittee. “There is no doubt that tech platforms and their algorithms prioritize content that favors sensationalism over hard journalism. The dominant online platforms have flourished, siphoning off huge amounts of advertising revenues that are the lifeblood of free local journalism.

“Consider the big storm that just blew through the Northeast over the weekend,” Oxley continued. “A nor’easter with blizzard conditions. Tons of work and a lot of cost and time for local broadcasters to cover it for millions of people. But not for Facebook, Google and the like. They simply take our coverage and profit from it.”

The JCPA would legislatively compel the platforms to come to the bargaining table, much like it played out in Australia, where there was formidable opposition.

“When Google was told by the government that they would have to pay for the news content that they wanted to use — this is the Australian government — the company essentially said, ‘We’re out of here,’ and threatened to pull Google search out of an entire country. That’s what monopolies do,” Senator Klobuchar remarked.

“As elected leaders, we certainly may not always like what we read or hear in the news,” Senator Klobuchar reflected at the end of her opening remarks. “I think all of us can relate to this. But I think we can all agree that ensuring the future of a vibrant and independent free press is essential to the fabric of our democracy and the American way of life.”

It turns out not everyone agrees, including two witnesses who argued against the JCPA and Senator Mike Lee (R-UT), who insisted on referring to the proposed collective of news publishers as a “cartel,” a pointed rhetorical word choice, implying nefarious, fraudulent or criminal interests. During his remarks, Senator Lee questioned journalists’ integrity, bias, trustworthiness, lack of innovation, and whether they’d really use the new revenues to reinvest in their newsrooms.

But Economist Hal Singer, Ph.D., the managing director at Econ One 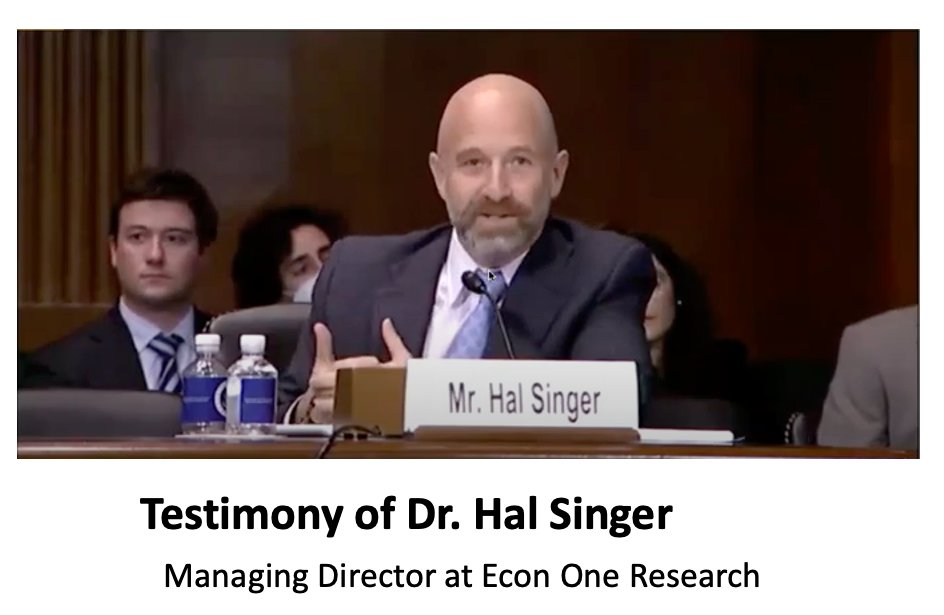 Research and advocate for the JCPA, said that’s nonsensical. "Because the platforms, as you know, Senator, have used a free-price, a zero-price model to consumers. The notion that the platforms having to write a check of, say, $5 billion every year for the payment of access is going to induce them to suddenly abandon their free model and start charging consumers access for search or charging consumers to access the Facebook social platform is uneconomic,” Singer said. 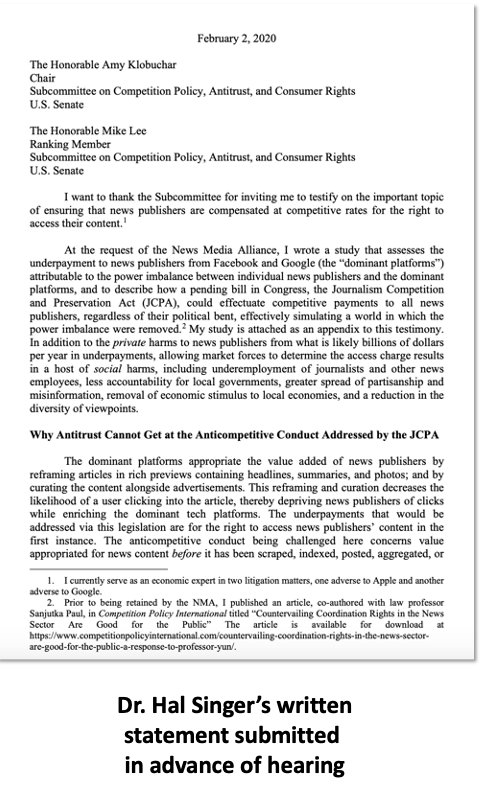 New York Times’s $550 million acquisition of The Athletic and its subsequent purchase of the popular game app, Wordle.

Trib Total Media’s Bertetto pushed back on the idea that news publishers don’t need this relief based on those kinds of deep-pocket anecdotes. “The Washington Post and The New York Times will probably be fine no matter what is decided, but New Kensington, Pennsylvania won’t be,” she said.

Question what you see and hear

The Cardinal News: The new (non-profit) voice for rural Virginia