Sorry, Jack Shafer. You Got This One Wrong! 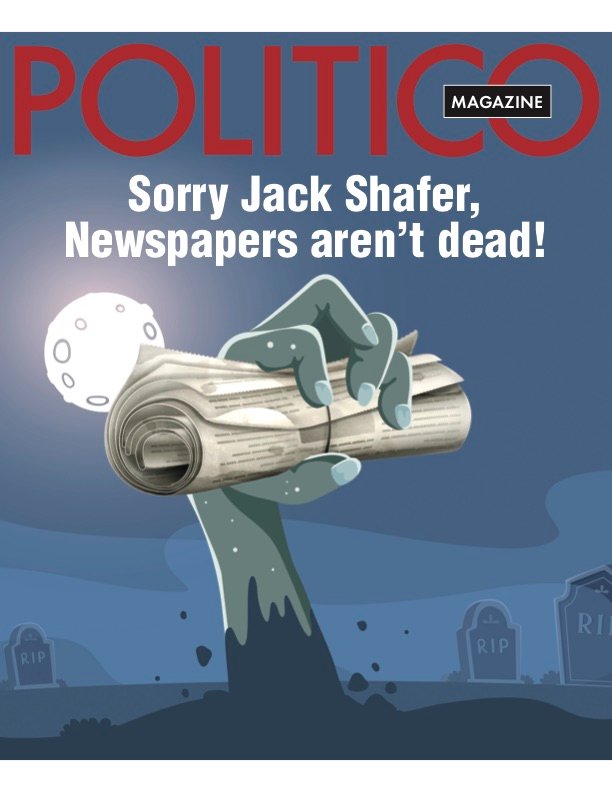 Everyone is entitled to their opinion, and no one knows that more than news publishers who welcome different voices within their platforms in order to influence, engage and sometimes enrage their readers. As publisher of E&P, I know that if given a choice, I’d rather have an angry audience over a disengaged one. After all, the opposite of love is not hate—it’s indifference.

So, I just have to assume that Jack Shafer, Politico’s senior media writer, was having a bad day when he authored his op-ed this week titled “Don’t Waste Stimulus Money on Newspapers.” After all, Shafer does have some ink on those fingers having spent some time editing two alternatives weeklies, the SF Weekly and Washington City Paper. But to make such a blanket statement about our industry, especially during a critical time, deserves an opposing opinion.

When Shafer discusses how much he’ll miss newspapers “when they finally vanish,” he does not clarify that he is merely discussing a single channel of the news publishing operation—the paper product. Yes, print frequency is now decreasing in many markets. My hometown newspaper, the Pulitzer Prize winning Tampa Bay Times, will now only arrive on my doorstep two days a week. But there is empirical data from numerous sources showing that during our current crisis, readers are racing to local news websites in huge proportions. TownNews, a company that hosts more than 2,000 local news sites, claims that in three weeks, web traffic is up a whopping 48 percent. And a Mather Economics study shows that digital news subscriptions during COVID-19 have also risen to an all-time high.

Perhaps the problem with Shafer is that he still thinks a newspaper is a singular paper product as he lives in a binary world where you either work for a newspaper or a “pure play” digital product like Politico or Slate, where he previously worked. Come on, Jack, you know better. Just because news publishers proudly keep the word “paper” in their branding does not mean that the end product must be printed on pulp. After all, some still “dial” phones, or “roll-up” windows, and just yesterday I swear I personally “ran out of steam.”

While other industry groups have removed the word “paper” from their brands, I’m sure the board of directors at America’s Newspapers (the name of the newly-combined Inland Press Association and Southern Newspaper Publishers Association) spent hours debating if they should remove “paper” from the legacy brand before ultimately deciding to leave it in their name.

Put Down the Roller, Jack, and Grab a Brush

Shafer painted our industry with a very broad brush when he wrote “most newspapers are sliding toward oblivion.” It’s true that the big market dailies will likely go through major, necessary changes in print frequency that would have occurred eventually, but were hastened by the economic chaos caused by COVID-19. Perhaps it also pains Shafer that some of the alternatives that he “cut (his) teeth on” may not whether this storm due to a much narrower advertising base centering on events restaurants/bars and entertainment venues, which will likely return to business post COVID-19 much later than most and as contracted industries. But there are thousands of smaller community newspapers that are still operating with decent profits and serving their communities that lack other news outlets. We learn this every day at E&P due to our reporting, the feedback we get from our stories and through emails, and the interviews I personally perform with news leaders on our weekly podcast series E&P Reports. Community publishers generally operate with much more efficiencies than the big market dailies and have better relationships with the local advertising community. Plus, they perform a necessary, critical service (as mandated in the Constitution) of making the local government accountable to the people they serve, or as some say: “Speak truth to power.” These are the cities and counties that must continue to have an authoritative, credible voice through this crisis and beyond.

Jack, I hope you got this out of your system because now is the worst time for local reporting to go by the wayside. I’ll keep following your work, but keep in mind that I’ll be following others as well who understand the necessity of local news in our society.

For the record, E&P salutes, supports and is 100 percent behind the hard work being done this week by America’s Newspapers, News Media Alliance, National Newspaper Association and National Association of Broadcasters as they lobby Congress to take action on two measures that would help ensure all local media can continue to provide the critical news and information during the COVID-19 pandemic. Also, we applaud the state press associations with their direct ties to the community papers across North America helping our industry work together as one. Moreover, we ask the thousands of local news publishers who we touch each day to join America’s Newspapers and run editorials supporting federal relief for local newspapers.

Listening to What Trust in News Means to Users: Qualitative Evidence from Four Countries