HereisOregon.com debuts with positive content and a commitment to connect the community

Everywhere you look, there’s bad news: political division, poverty and pandemic, climate catastrophe and supply-chain woes, and worst of all, war. The newsroom at The Oregonian in Portland is keenly aware of the importance of these serious stories and committed to telling them, but they’re also cognizant that readers may be feeling some news fatigue and feel particularly disconnected from their communities as the COVID-19 pandemic lingers. This winter seemed the perfect time to get reconnected and reacquainted with the remarkable people of Oregon and the state’s best features — the mission behind HereisOregon.com. 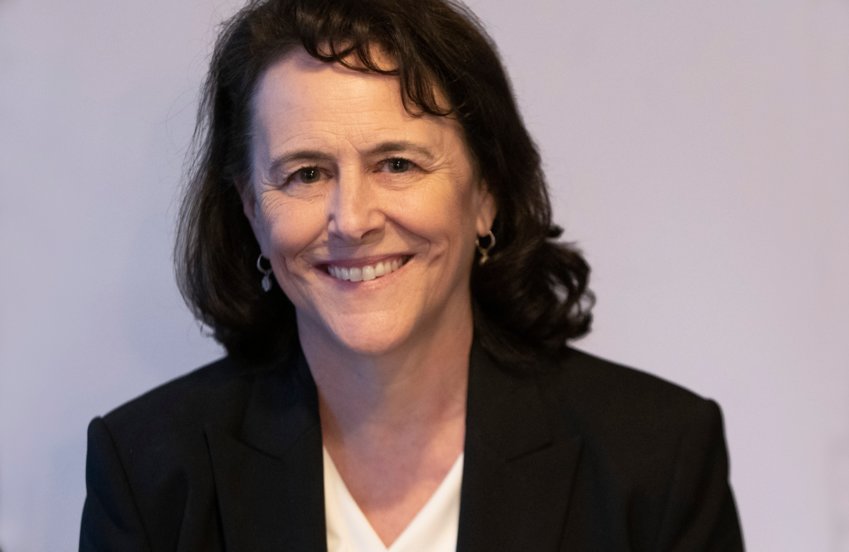 The HereisOregon.com seed was planted years before the pandemic, Therese Bottomly, editor and vice president of the Oregonian Media Group, explained. Former editor Mark Katches led the newsroom then. “We were learning from our sister site, AL.com, which is also part of Advanced Local. They have several newspapers in Alabama, and they’d seen great success with a couple of social brands. One is called ‘This is Alabama,’ and another is ‘It’s a Southern Thing,’ which is a humorous site, and people really liked it,” she recalled. “(Mark Katches) said, ‘Let’s take a page from their book and celebrate Oregon a little bit,’” she recalled.

Katches moved on to the Tampa Bay Times in 2018, and Bottomly was appointed to her current position. “When I was appointed editor in September 2018, I wanted to be known for three things: a robust daily newspaper, watchdog journalism that makes a difference and celebration of the place we live,” Bottomly said. Then, the pandemic descended, and the idea was backburnered until the summer of 2021, when the Oregonian’s president, John Maher, and Bottomly reignited the project. 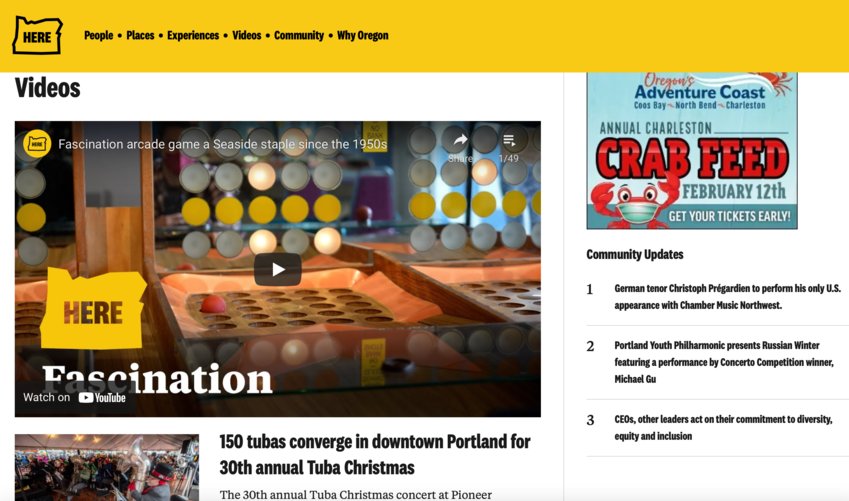 HereisOregon.com made its debut in late 2021. A feel-good news companion to The Oregonian and OregonLive.com, the site offers inspiring stories from across the state.

The content would be curated from reporting already being done by the newsroom — stories about travel, food, Oregon’s outdoors lifestyle and human-interest stories. Samantha Swindler, a reporter and visual journalist with the Oregonian, took the project under her wing, and HereisOregon.com made its late-2021 debut.

As with any site or social media presence, the success of the launch will largely depend on the resources and attention the news outlet devotes to it. Bottomly recalled launching a Facebook group during the pandemic, which was intended to be a “virtual coffee shop,” where members could share information and good news, too. But the group fizzled without moderation, she reported. 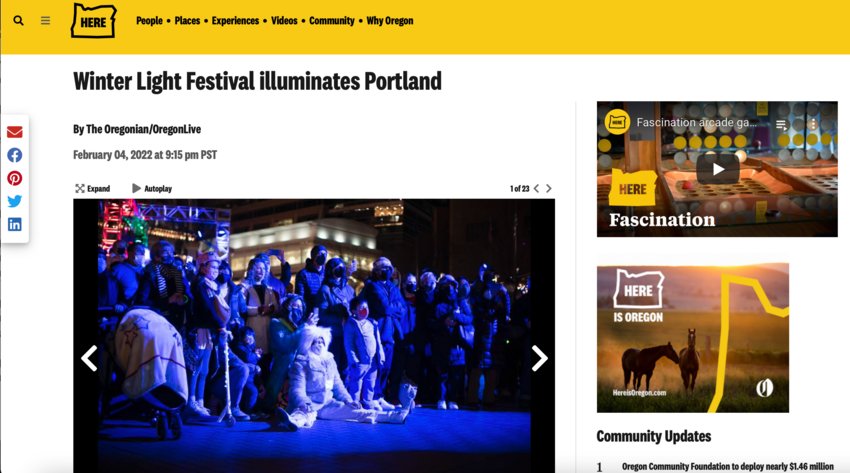 One of the news publisher’s goals for HereisOregon.com is that its content — text, photography, audio and video — be engaging and share-worthy.

The site is replete with good news about the people and the pleasures of Oregon — the mountains and seashore, the culinary and craft beer scene, the entrepreneurial spirit of its business community, and so much more. The site is decidedly politics-free.

Bottomly pointed to a recent story as a perfect example of the types of feel-good content they seek to publish. Swindler wrote about Gresham, an Oregon town with a main street lined by mom-and-pop shops. Their proprietors find it difficult to get out to run errands or pick up coffee and lunch while tending their storefronts. Todd Kirnan, a local celebrity with autism, has come to their rescue. Kirnan, an ever-cheerful, enterprising fella, delivers sustenance to the business owners. He’s so beloved, the town nicknamed him, “Mr. Gresham.” “He loves the job, and they love him,” Bottomly said. “They love him so much that they raised money and put up a bronze statue of him.”

Asked why it was important to create a unique URL, distinctive from the newspaper’s website, she explained that it’s about an experience for the reader, to create an environment of “positive, happy news.” “Some people are going to want to spend time there, and frankly, some advertisers may want to be there, too,” she said.

Bottomly’s colleague, Amy Lewin, is vice president of brand and strategic partnerships. Asked about how advertisers are responding to the site’s mission, she explained in an email, “Interest to contribute brand messages and stories with Here is Oregon is both exclusive to and inclusive of the digital and print advertising products we offer to advertisers of The Oregonian and OregonLive.com. Because of this, many advertisers find the opportunity to share good brand stories adjacent to our team’s content. … Others see the advantage of expanding the reach of their presence to the wider audience.” Lewin noted that, as of the last comScore audit, The Oregonian and OregonLive remain the top source for news in the Pacific Northwest, averaging 9.5 million unique visitors a month.

They promoted the site to subscribers and across social media channels, including to 30,000 Facebook followers. Social media will continue to be key to the publisher’s marketing strategy, and also to their audience. HereisOregon.com has a tagline, Bottomly noted: “Share the good.” And that’s precisely how the team hopes readers will engage with the site.

Karly Imus, director of audience at Oregonian Media Group, added: “Here is Oregon gives us an avenue to highlight that content through the website, but also to ‘share the good’ via social media channels. The growth has been phenomenal, particularly on Instagram and TikTok. In the last three months, we’ve grown our Instagram audience by more than 50%. We added TikTok this year and are growing rapidly there, as well — more than 1,000% in a matter of weeks.”

The news publisher trusts that the site will not only inform readers but create a sense of community. “It’s important to connect people, especially when so many people are isolated,” Bottomly said. “There is a real need for this sense of connection and for building people up rather than tearing them down.”

The business model at the newspaper’s site, OregonLive.com, which went live some 18 months before, continues to evolve. “We’ve continued to build out a digital consumer strategy, where more of our content is subscriber exclusive. It’s about 10% to 12% of the content right now,” the editor explained. But “Here Is Oregon” remains freely accessible — more good news for readers.