“Private media” might seem an anachronism to social media — the places people go to overshare. But the new rule, Twitter explained, was designed to protect people — often, women — from having their images used against them in a targeted campaign of harassment or intimidation.

“Sharing personal media, such as images or videos can potentially violate a person’s privacy,” the company said when it announced the privacy policy update. It enables subjects in video, photos and presumably things like memes to demand Twitter remove them because they haven’t given express permission for their likeness to be “published” and shared.

Twitter’s policy already prohibits the dissemination of private phone numbers, home addresses and other forms of identification. Twitter contends that this new policy is meant as an extension of that.

The new rule has its fans. Jeff Chester, executive director of the Center for Digital Democracy, told Washington Post's Aaron Gregg, “The practice announced today is long overdue, and hopefully will curtail the unimaginable harassment that people have gone through over the past decade and a half, where unauthorized use of their images and personal information has been allowed to fester online and to do people harm.”

“This policy is not applicable to media featuring public figures or individuals when media and accompanying Tweet text are shared in the public interest or add value to public discourse,” Twitter explains on its site. Critics of the new policy agree that this language is so vague that it’s impossible to see how policing it could be anything but subjective. They also forewarned that the policy as it reads is vulnerable to abuse. That immediately manifested, with mass reporting and coordinated campaigns, including by domestic extremist groups that sought to scrub the site of their images and get targeted accounts permanently suspended.

Odette Yousef, national security correspondent for NPR, and her NPR newsroom colleague Shannon Bond, business correspondent, were guests on “All Things Considered.” They shared stories of how Twitter users have already been penalized under Twitter’s new privacy rule with host Ari Shapiro.

National Public Radio (NPR) host Ari Shapiro spoke with two of his NPR colleagues on “All Things Considered” on Dec. 7, about a week after the new policy was introduced. Shannon Bond, NPR business correspondent, and Odette Yousef, national security correspondent, spoke about how the policy had already penalized Twitter users, including documentarians, researchers and activists.

“I spoke with Gwen Snyder,” Yousef said. “She's an organizer and extremism researcher who documents activities of the far-right in her hometown of Philadelphia. Last week, she got notification that a Twitter thread she'd put out back in May of 2019 had been flagged under the new policy. It was a thread regarding a Proud Boys event held in Philadelphia.” 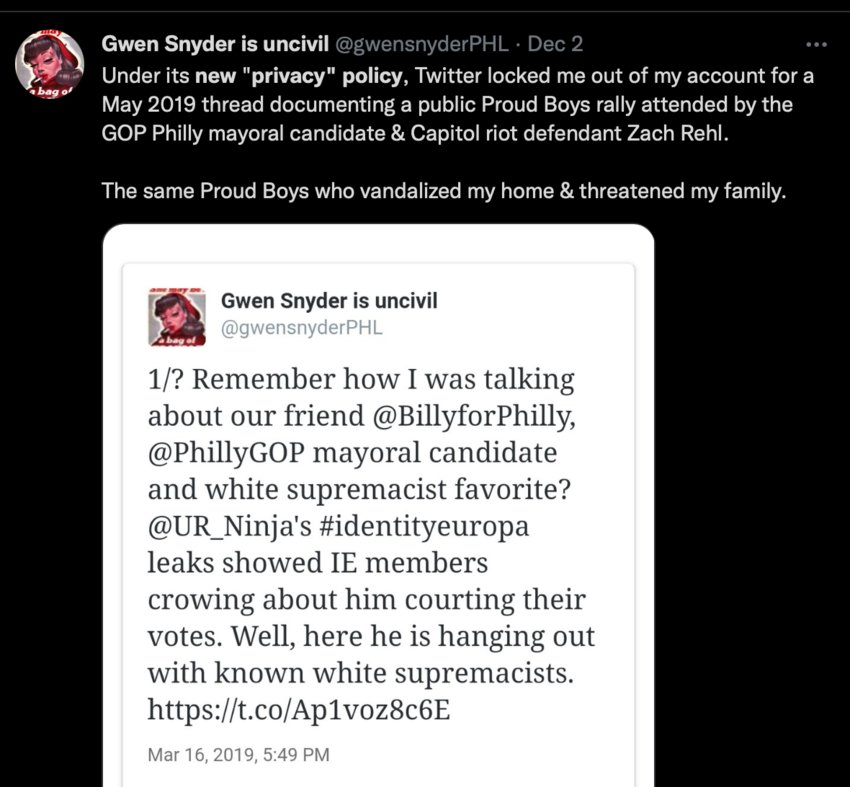 Gwen Snyder, an extremism researcher, had a 2019 Twitter thread flagged under the new privacy rules. It was later allowed because it documented a public event in a public space.

Yousef reported that Snyder deleted the thread, lest she faces having her account permanently suspended. Still, she later heard from Twitter, which acknowledges that it was an unjust flagging, after all, because it was documentation of a public event in a public space, still acceptable under the new rules.

NPR’s Shannon Bond said, “Twitter, you know, has had this policy in place in other countries since at least 2014, in countries that have legal rights to privacy. But as far as we can tell, it has not been abused in this same way there — the way it's been abused here in just the past week.”

When staff appeals for change, be responsive