Walter Hussman Jr. (center) addresses the crowd at a celebration for the opening of the Hussman School of Journalism and Media. (Photo provided)
Posted Friday, December 6, 2019 12:00 am
Evelyn Mateos 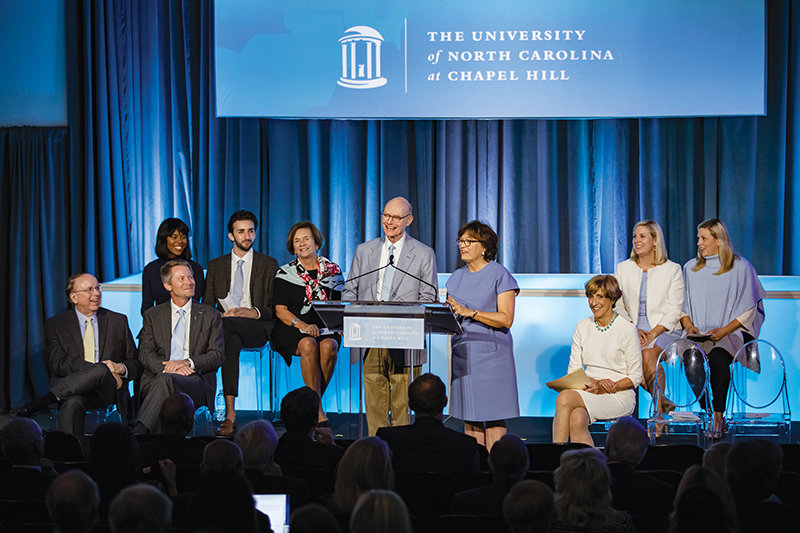 Walter Hussman Jr. (center) addresses the crowd at a celebration for the opening of the Hussman School of Journalism and Media. (Photo provided)

Following a $25 million gift by WEHCO Media, Inc. chairman and Arkansas Democrat-Gazette publisher Walter Hussman Jr. and his family, the University of North Carolina’s (UNC) School of Media and Journalism was recently renamed as the Hussman School of Journalism and Media. Hussman graduated from UNC in 1968.

Discussions began in 2014 when Susan King, dean of the journalism school, met with Hussman in Little Rock, Ark.

“We began a conversation as publisher and dean,” she said. “It was really about the challenges facing the business.”

Hussman ended up writing down the values he believed he learned at UNC. King immediately thought they should be etched into a plaque for journalism students to view. One example of Hussman’s values is impartiality—serving the public and bringing them the truth but allowing them to make their own decision. It is a critical element of journalism, King explained.

Another example is a phase that King says she loves: “He believes that journalists must ‘cover the news and uncover the news’ because not everybody wants to tell you what’s going on.”

Soon, the conversation shifted, and the idea was presented to Hussman if he would be willing to donate to the school and have it named after him.

“I was overwhelmed and amazed,” Hussman told E&P. “When I thought about having our name on that school, I thought ‘Gosh, it’s one of the best journalism schools in America.’”

But Hussman believed if he and his family could provide resources and these core values to the school, it would have a major impact on improving the news cycle in the future and maybe even re-establish some of the lost trust in media. In addition, Hussman wanted to give hesitant journalism students a newfound desire to study the subject.

Once Hussman was board, the news was officially released in September. The evening before, the school was rebranded with banners and signs announcing the new name—and even the school’s website was redesigned to reflect the change.

“That made a big statement for the students,” King said. “They were shocked that we could do that overnight—but they get the enormity of this moment.”

The monetary gift, which will be dispersed over several years, will raise the salaries of the current professors and used to invest in resources for the students.

In late October, a ceremony took place to celebrate the opening of the new school. King said that the plaque etched with Hussman’s values unfortunately was not finished in time but will be completed and unveiled in January 2020.

“(Hussman) really wants to make a statement about what matters in a democracy and the role of journalism in it,” King said. “This gift gives him a chance to really make a statement. It’s not money, it's a value statement.”