A degree in journalism might take the aspiring journalist far, but it’s a lifelong passion for journalism that led Francesca Chambers to recently be named White House correspondent by Gannett for USA TODAY. She shared the roots of that passion in a late-May 2022 webinar with Mike Blinder, host of E&P Reports and publisher of Editor & Publisher.

“I was always interested in journalism as a child. I created a little newsletter about my household and my neighbors,” Chambers said. “That interest became a passion in middle and high school, where excellent teachers encouraged me to follow my passion. It allowed me to become the co-editor of my high school newspaper and set me on a course to attend and graduate from the William Allen White School of Journalism and Mass Communication at the University of Kansas.” 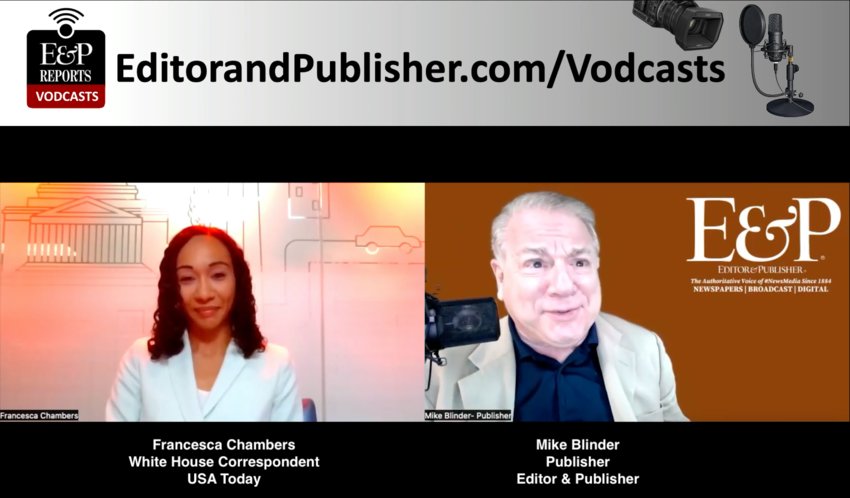 Chambers followed the advice she shares with journalism students today by taking an entry-level job as a web editor directly from college. This initial and valuable learning experience in the profession started her on the path to the White House.

Serendipity often leads to opportunity, and Chambers was in the right place, Washington, D.C., at the right time. The Washington Examiner expanded its political and governmental coverage and offered Chambers a reporter position in 2011. More important for her career, The Examiner allowed her to cover a wide range of stories, many of her choosing.

After three years with The Examiner, she joined DailyMail.com in April 2014 as its senior White House correspondent. The 2016 presidential election put Chambers in a position to be embedded in the campaigns of former Secretary of State Hillary Clinton and Senator Bernie Sanders. She is also often on the road with Republican candidates.

During her time at DailyMail.com, she covered the Obama and Trump administrations and was on the DailyMailTV team awarded an Emmy in 2019. Her experience and reputation led her to be named McClatchy's senior White House correspondent in October of that year. She remained with the company until joining USA TODAY.

Chambers has had many mentors during her career. Still, she cites, in particular, the guidance and impact of Susan Page, USA TODAY’s Washington, D.C., bureau chief and president of the White House Correspondents’ Association, and Colleen McClain Nelson, executive editor of The Sacramento Bee and McClatchy’s California regional editor.

As many professions focus on promoting DEI (diversity, equity and inclusion), Chambers is aware that she represents a role model for journalism at a major news outlet.

“I encourage young journalism students and working journalists to be courageous and confident as there are more DEI opportunities. Any of them who are assigned coverage of the 2022 election cycle must not be afraid to contact the candidates and ask the hard questions,” Chambers said. “Cultivate a broad range of sources, including those independent of the candidate you’re covering.”

Chambers is very involved in promoting journalism as a profession as she serves on the White House Correspondents’ Association board and its Public Mission Committee, which awards journalism student scholarships.