This is one Echo that won’t fade

Posted Friday, December 10, 2021 12:00 am
Dink NeSmith, co-owner of Community Newspapers, Inc. and now the publisher and chairman of The Oglethorpe Echo Legacy

I’ve been a 50-year advocate of the value of community newspapers. I decided to rally the local community to renew and extend their support of The Echo. This newspaper has been and should continue to be our local voice.”
Dink NeSmith, co-owner of Community Newspapers, Inc.
Bob Sillick | for Editor & Publisher

When a newspaper has a 148-year relationship with its community, it shouldn’t end, and Dink NeSmith, co-owner of Community Newspapers, Inc. (CNI) — publisher of 25 newspapers in Georgia, Florida and North Carolina — wasn’t about to let that happen.

As a resident of Oglethorpe County, just outside of Athens, Georgia, and a subscriber of and contributor to The Oglethorpe Echo, NeSmith learned his friend Ralph Maxwell, owner/publisher of the newspaper, was planning to retire and close the paper. Maxwell and his family had owned and operated The Echo since 1956.

NeSmith spotted an opportunity, but not necessarily to add The Echo to the roster of CNI, based in nearby Athens. Instead, having recently relinquished his co-CEO role of CNI, but with newspaper ink still coursing through his veins, NeSmith decided his personal goal was not only to rescue The Echo but evolve it into something new.

Instead of The Echo printing its last edition on Sept. 30, Maxwell agreed to continue operating the paper through October. NeSmith created a 501(c)(3) nonprofit corporation as the owner and operator, and he became a non-paid volunteer. The Maxwell family donated the paper to the nonprofit.

“We’ve lived in Oglethorpe County for the past decade,” said NeSmith. “I’ve been a 50-year advocate of the value of community newspapers. I decided to rally the local community to renew and extend their support of The Echo. This newspaper has been and should continue to be our local voice,” said NeSmith.

Because of his influence in the county, NeSmith invited others to be members of the nonprofit corporation’s board, emphasizing diversity from business, education and other sectors of the community. 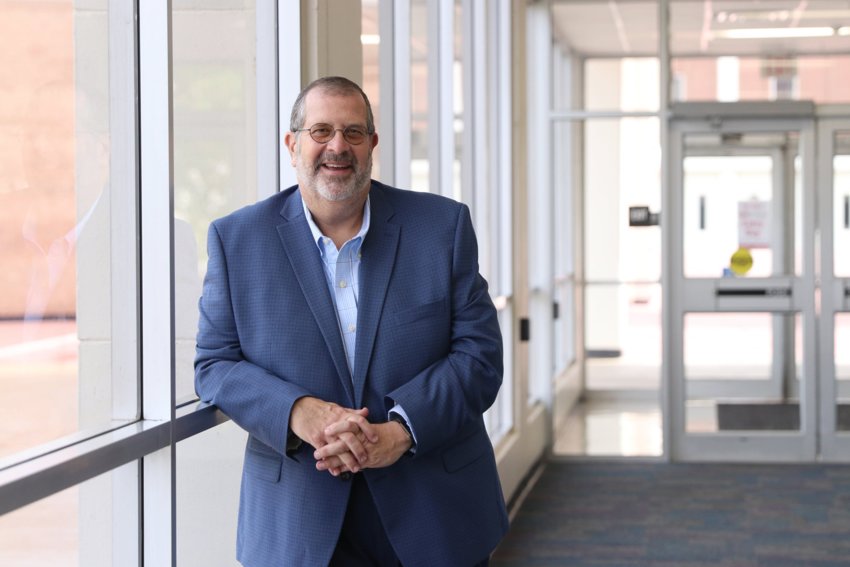 It’s how NeSmith planned to staff and operate The Echo that appears to be unique — almost revolutionary — for a community newspaper. Instead of hiring a regular paid staff of journalists, photographers and other newspaper professionals, he went to his friend, Charles Davis, dean at the University of Georgia's Henry W. Grady College of Journalism and Mass Communications in Athens. NeSmith, a 1970 graduate of Grady College, proposed offering opportunities for its journalism students to staff The Echo.

Davis realized this was an unprecedented opportunity for his students and joined with NeSmith to develop the relationship between the college and The Echo.

“Journalism students, like those in most areas of studies, crave real-world experiences, and I'm always looking for a hands-on learning experience for our students,” said Davis. “What was particularly valuable about this opportunity is students would be reporting on stories in a mostly rural community. Residents and news sources were more likely to talk with the student journalists than if they were reporting for a suburban and especially a major metropolitan newspaper.” 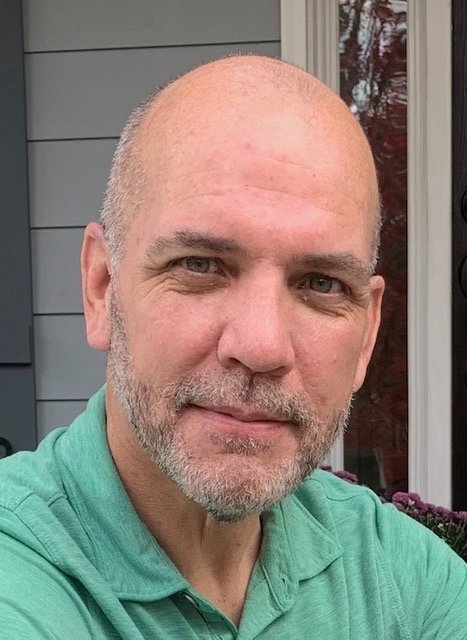 The plan, which has now been initiated, was for NeSmith to assume operations and publication of The Echo as of Nov. 1. Andy Johnston, a graduate of Grady, a part-time instructor and journalist with more than 30 years of newspaper experience, was named the managing editor.

With the input of NeSmith and Davis, Johnston selected seven Grady College journalism students to serve as The Echo’s staff during the November 2021 - January 2022 period.

Almost as soon as they announced the paid internship opportunity, 23 students applied. The Echo hired seven students — three seniors, three juniors and one freshman. They will serve as the team for the paper during the fall semester and are considered a bridge program to help NeSmith transition to the new nonprofit model. Many of these seven students have gained experience on the staff of the college’s independent student newspaper, The Red and Black.

“We had a great response from the students, and I feel like we were able to put together a great team of student journalists,” said Johnston. “This is a tremendous opportunity for the students not only to gain real-world experience but also to help save the newspaper.” 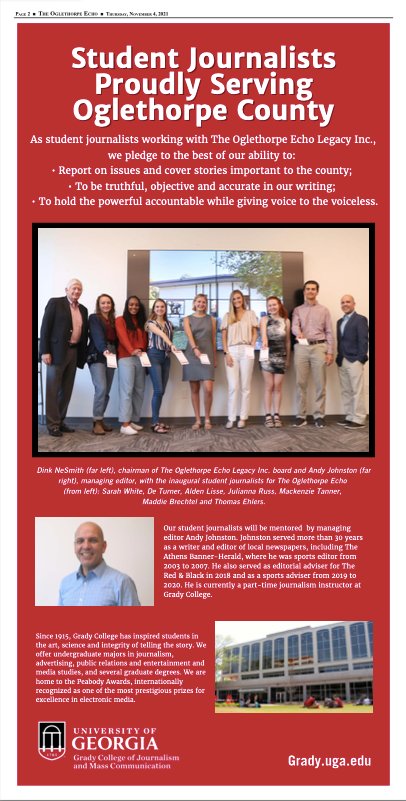 Full page in The Oglethorpe Echo on Nov. 4, 2021, introducing the student journalists, their mission and their commitment to the community.

According to Davis, all Grady's community journalism class students will be reporting, writing and recording visual images for The Echo beginning with the first 2022 semester. More of those students will come from the college's capstone program, the last class of the seniors’ journalism curriculum.

Students who serve as interns with The Echo will have the opportunity to apply for paid internships for summer 2022.

NeSmith’s plan includes establishing a youth advisory board of students from Oglethorpe’s only local high school. The board will meet with NeSmith regularly to offer story ideas that will resonate with their fellow students. In addition, NeSmith wants to add a monthly one-page high school newspaper to The Echo.

However, NeSmith’s greatest satisfaction is the response from the community at large, especially volunteers to answer phones, provide lawn care services, various maintenance and other jobs required to keep a newspaper operating. Besides the regular content NeSmith has been writing for the paper for years, he said he is also preparing bank deposit slips and vacuuming the floors.

“We’ve been particularly blessed with the many people making donations,” said NeSmith. “A friend of mine who doesn’t live in Oglethorpe County is contributing $10,000. Another long-time resident paid for a subscription to The Echo with a $100 bill, although the subscription rate is only $23.

“Dean Davis, Andy Johnston and I know the reinvention of The Echo won’t be easy, but like for our journalism student interns, this will be a learning lab, a learning adventure for all of us,” added NeSmith.