The search for a slower pace of life and news

I see two things. One is depressing and one not.”
Peter Laufer, Ph.D., is an award-winning journalist, professor of journalism and James N. Wallace Chair of Journalism at the University of Oregon. He authored the book, “Slow News: A Manifesto for the Critical News Consumer.”
Gretchen A. Peck | for Editor & Publisher

About a decade ago, Peter Laufer, Ph.D., was in Italy enjoying a leisurely lunch with a publisher. They were making plans for an Italian translation of a book he’d written, “The Dangerous World of Butterflies,” when their discussion turned to the plight of news and the public’s changing news consumption habits. Where they sat, they weren’t far from where the “slow food movement” was born — for which quality ingredients and their provenance from farm to table are valued above speed and cost-efficiency. Laufer conceived of a similar concept applied to newsgathering, what he called “slow news.”

An award-winning journalist, professor of journalism and James N. Wallace Chair of Journalism at the University of Oregon, Laufer literally wrote the book on slow news. He published “Slow News: A Manifesto for the Critical News Consumer,” first in Italian, with the English version following in 2014. Naturally, when Italian filmmakers Alberto Puliafito, Andrew Coccia and Fulvio Nebbia embarked on a documentary exploring European journalism and news business, they sought out Laufer’s expertise. They refer to him as their “Gandalf” in their 2020 Java Films’ documentary, “Slow News.” 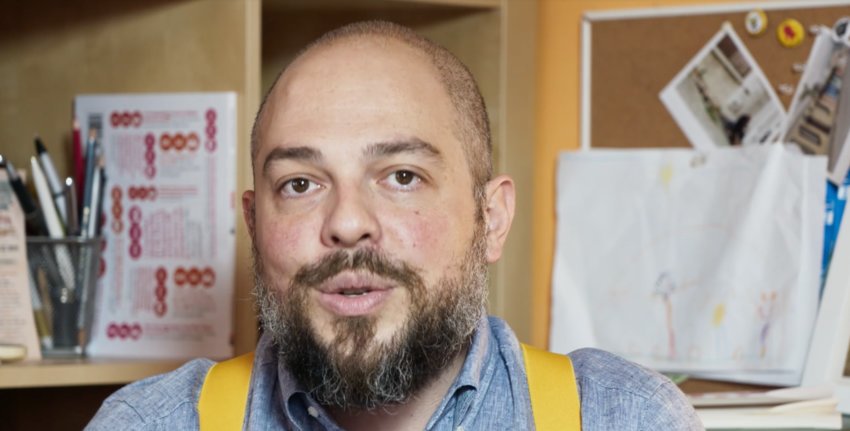 Alberto Puliafito, the director of “Slow News” spoke in the film about his former role as an editor-in-chief, where he was sometimes tasked with editing as many as 400 articles a day. It inspired him to document the “slow news movement.” (Still from “Slow News,” courtesy of Java Films)

It’s a complicated story to tell, as much about culture as it is about journalism, but distilled down — slow news is decidedly uncomplicated. It’s the process of doing fundamentally good journalism.

The “Slow News” documentary (streaming at https://vimeo.com/ondemand/slownews) delves into troubling digital-age trends that have eroded quality journalism and the public’s trust in it — clickbait, misinformation, chasing after audience and producing expedient but error-prone content and lots of it. 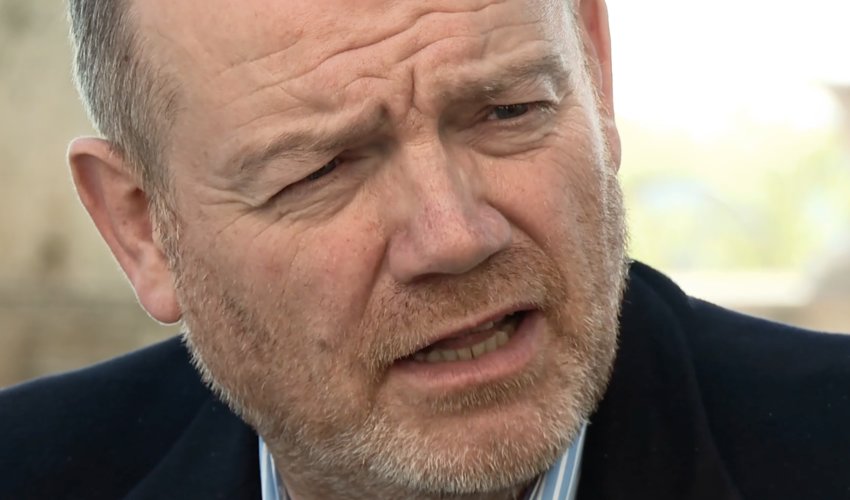 Mark Thompson, the former president and CEO of The New York Times, appeared in “Slow News.” Here, he spoke about the pitfalls of digital advertising. “The pricing of digital advertising is controlled by Facebook and Google, very big players, and it’s very hard to be distinctive, to do something different. And the danger for a publisher who bases their model entirely on digital advertising, particularly on digital spare advertising, is you end up making crap that isn’t worth paying for and making stuff that’s the same as everyone else is doing,” Thompson explained to the filmmakers. (Still from “Slow News” courtesy of Java Films)

The filmmakers recount remarkable stories demonstrating the deterioration of newsgathering. In one account, a former editor-in-chief, Puliafito, recalls how he’d been tasked with editing upwards of 400 articles a day for an Italian news outlet — an impossible feat for even the most agile, caffeinated editors. He also spoke of how he became obsessed with tracking engagement numbers and, therefore, less focused on his primary responsibility of mentoring reporters and editing their work.

At that same Milan-based news outlet, journalists were often tasked with writing as many as 15 stories in a single day about disparate subject matters. So much content that by day’s end, according to one account, a reporter could easily forget what they’d written about that very morning.

The expectation that reporters and editors sustain that pace and produce solid work is comically absurd. Not only should journalists be able to remember what they’ve written in a single day, but they should also be intimately acquainted with their work and able to explain why it matters. Most of all, they should be able to defend it when it comes under scrutiny or challenge. 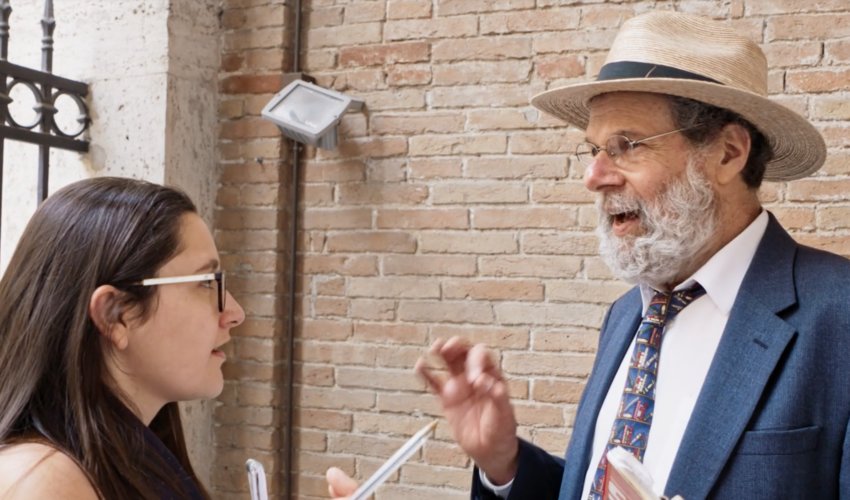 Dr. Peter Laufer is interviewed by an Italian journalist in the film “Slow News.” He explains that the concept of slow news is quite simple: It's about producing fundamentally good journalism, no matter the platform. (Video still courtesy of Java Films)

The pace at which news is delivered today isn’t just a minefield for journalists and editors to navigate; it can be a liability for news publishers, as well. Laufer suggested that publishers mindful of the news business should also show concern for accuracy because inaccurate reporting can open the door for libel challenges.

“In today’s world, just being threatened with that kind of suit can make a publisher fold because they have the enormous cost of defending it,” Laufer said.

As the film lays out, there are some simple ways to incorporate slow news into newsroom culture.

It doesn’t fall solely on the shoulders of the news media to effect cultural change. Laufer also puts some of the onus on the public, suggesting we all need to take breaks from our digital devices and rebel against algorithms designed to enrapture us while devaluing journalism. 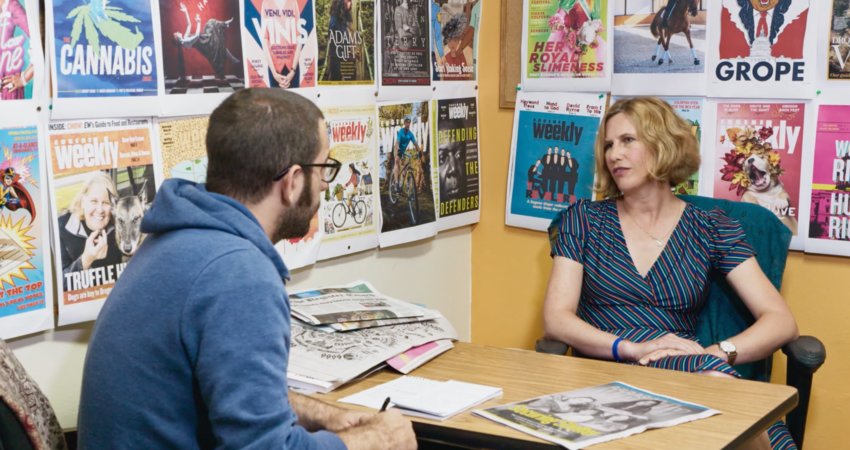 Camilla Mortensen is the editor-in-chief of the Eugene Weekly, an alt-weekly that was founded as “What's Happening” by a collective of local women who cared about arts, culture, music and the community itself. Seen here in the film “Slow News,” Mortensen suggests that alt-weeklies have been a model of slow news in action. “That's what alt-weeklies, many of them, have been doing,” she said. (Image courtesy of Java Films)

“I see two things. One is depressing and one not,” Laufer told E&P just before the New Year. The bad news, he said, is that apathy about news abounds. Increasingly, people are shying away from legacy news media — some because they’ve lost confidence in journalism; others who simply find the allure of social media more compelling as a news source.

“The sad part of that is the superficiality, the fast aspect of [social media,] and the question of whether or not what you’re seeing is even news,” Laufer said.

A more uplifting observation Laufer reported to E&P is that student journalists grasp and embrace the slow-news concept. He challenges J-school students with a couple of exercises that require them to focus entirely on observation and description without the distraction of technology. 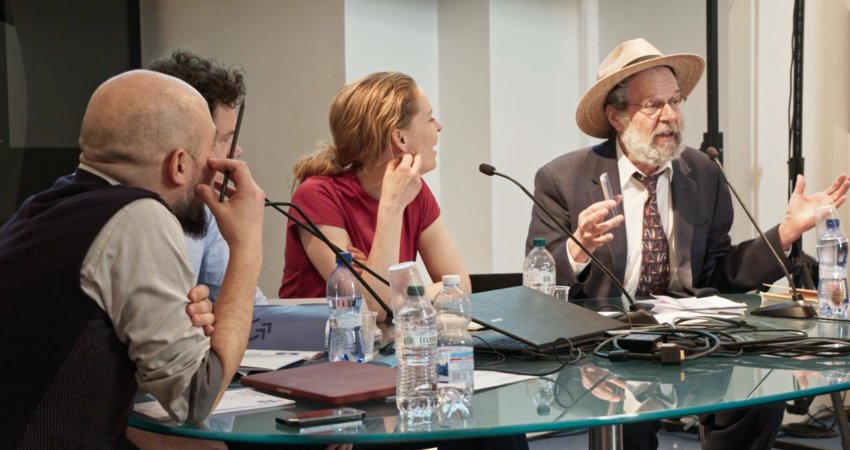 Peter Laufer, Ph.D., spoke at a panel on slow news. He made a point about concentration and being present by asking a member of the audience to relinquish their smartphone for the entirety of the presentation. (Still from "Slow News," courtesy of Java Films)

In one, students are asked to sit quietly for a period of time but in some busy, populated setting, without their digital devices. He instructs them to take note of everything they see, smell, hear and experience. They often return to the classroom energized by what they discover about the heightening of their own situational awareness without any digital static.

The professor also asks students to put pen (or pencil) to paper and write — not to abandon their keyboards altogether, but from time to time, to take a manual approach to storytelling. He contends there is focus, imagination and clarity to be found in the slow pace of penmanship.

CRIM to partner with Pickleball518