I only think that awards are important to everybody, and if not that, a nomination serves as a recognition and a positive drive to do better work.”
Amaal Malik, Indian music director
Robin Blinder | Editor & Publisher

What a spring this has been, and the last week just capped it off in a very trying but educating way. If you are on social media — but especially in the Twitter-sphere — you saw that Editor and Publisher, as my husband would say, “backed into the stove.” And it hurt! I’ve never been very active on social media. I believe it has its place, but as someone recently reminded me, “It’s not the real world.” This experience did not change my mind.

On Friday, May 13th, (yes, Friday the 13th), my husband and co-publisher, Mike, pushed our article “Editor and Publisher’s 2022 Class of Editors Extraordinaire” out on our 7 a.m. email and social media. Before he did that, he created a montage of the 15 faces of the editors — seven men and eight women — who had been chosen for this salute. And that started the Twitter cavalcade.

If you’ve been reading E&P for the past year, you know that we have “upped our game” in salutes of those in our industry. We have Publisher of the Year, Sales Superstars, 15 Over 50, 25 Under 35, … well, you get the picture. The reason we decided to increase the industry salutes was to 1) create an opportunity to recognize more individuals and teams for their contributions to the industry, and 2) through their recognition and accomplishments, educate and inspire others who aspire to become all they can.

I had been looking in our archives and realized that, until 2010, we had an editor (or editors) of the year.  In our May issue we decided to salute editors because as we stated, we wanted to “uncover and recognize the leaders in our newsrooms whose names may not always be as familiar as bylined reporters, but continue to strive to make our storytelling better, be an aspirational mentor, stand tall against adversity, and continue to remain committed to the quest for truth and accuracy.”

If you have been saluted, nominated someone for one of our salutes or even read any of our salutes, you know that we hold a nomination process for about three weeks. During that time, we invite anyone to go to our webpage and nominate an individual (or sometimes a company or team). Those nominations then populate a spreadsheet from which we internally make the choices. The decision is based upon the nomination itself — what was written, how compelling the story, the accomplishments listed, etc.

After we have made our selections, both the “nominator” and the “salutee” are notified by email of our decision. At that time, I will email the award winner to ask them to answer some questions and submit a headshot (and sometimes other photos). It is at that time that I learn the gender (often names can be dual-gender), race, etc. of the winner. And that is where this story takes a turn.

About a week after we made our selections, I received everything via email and realized that our Editors Extraordinaire salute lacked diversity. In fact, our list of 15 editors were all white. At that point, I had a decision to make. Do I “put my hand on the scale,” delay the salute and go out searching for more diverse candidates, or do I go forward with the salute and honor both the people who were nominated and their colleagues and management who nominated them? I chose the second option, knowing full well that this was not a great situation.

It was the photo montage of the 15 editors that sparked debate on Twitter and by email, phone calls, etc. During most of this time, I stayed silent. Mike, our publisher and my husband, published an article entitled “A ‘wake up call,’” explaining the situation and apologizing for not casting a wider net.

Truthfully, when we did go back and look at all the editorial nominations, we had not received any nominations for people of color. That is a problem, and unfortunately, that is also often a problem in our industry. As I have attended many conferences over the past few months, I am often surprised at the lack of diversity in our industry.

We at E&P have made efforts toward diversity in our coverage over the last year. We pledge to do whatever we can to correct this issue in our salutes — by casting a wider net and asking those who have the ability and opportunity to nominate people of color they work alongside. However, the salutes will live on. We believe they have a place in our industry and in our magazine. They will not be juried by a larger group because that is the purpose of our EPPY Awards. The Pulitzer Prizes, the EPPY Awards, our E&P salutes and all of the other recognition opportunities have their place in our industry.

I’ve been asked why our editor list did not include Miami Herald Executive Editor Monica Richardson, a Black editor whose team received the recent Pulitzer Prize for Breaking News. I have two answers to that. One, although she is more than qualified, no one nominated her for our salute. Second, Ms. Richardson is receiving great recognition from the Pulitzer committee. We’re not saying that the people we recognize are the best in the industry. This is not a contest. E&P salutes are just that — a nominated salute that recognizes some of the people in our industry who may never be on a Pulitzer Prize-winning assignment or team. But their contributions deserve to be recognized. They are just as important to their local communities.

I am truly sorry that our group of 15 editors did not include anyone of color. However, I am equally as sorry that the 15 people we chose — every one of them deserving recognition and appreciation — had their 15 minutes sullied by social media backlash. I know that each of them was contacted (probably more than once) and urged to rescind their nomination. We gave them each that opportunity — not because we believed they should but because we believed they could and should make that decision for themselves. I’m still proud to honor and recognize each person on the list of Editors Extraordinaire because you each deserve it. 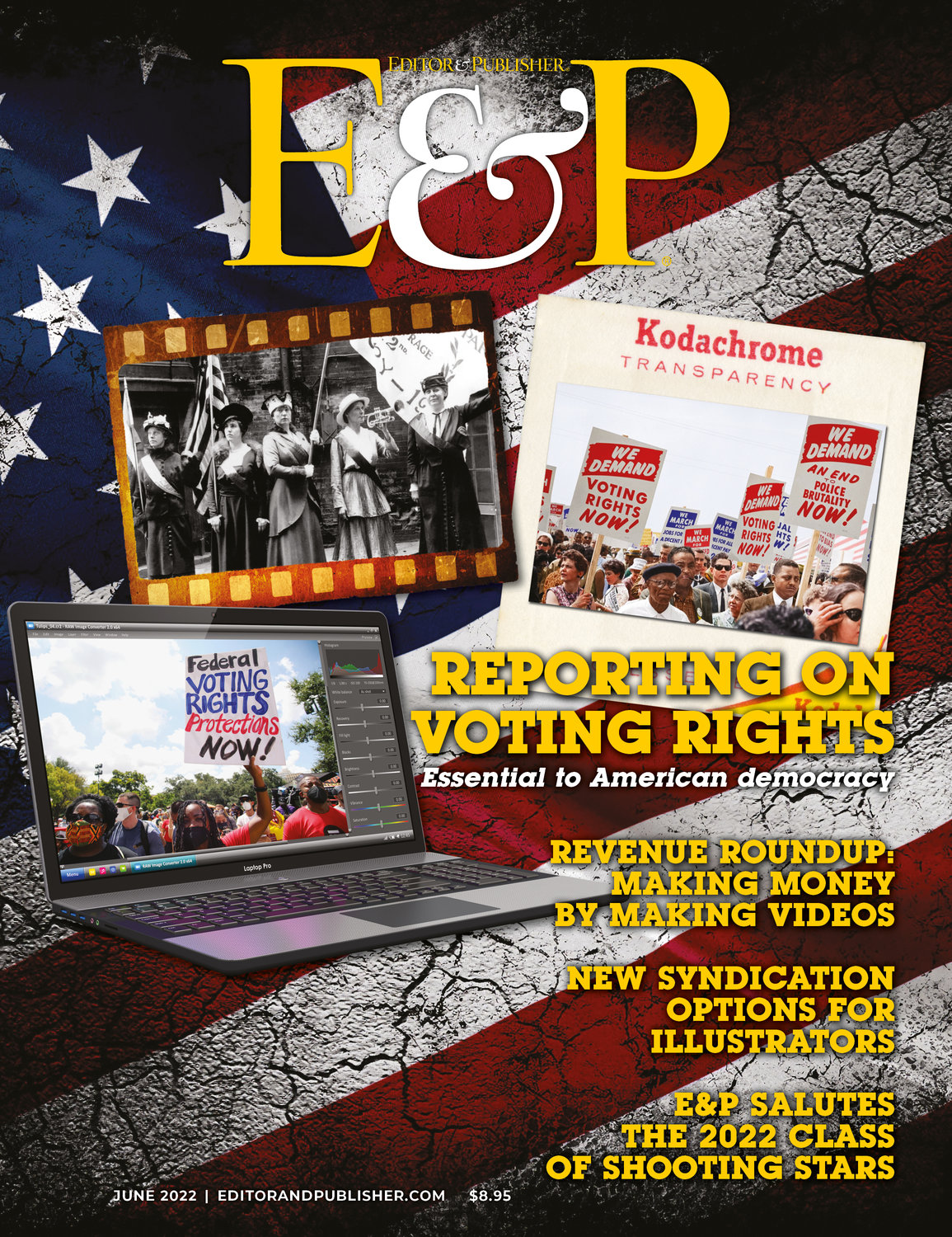 The June issue of E&P contains another salute — E&P’s 2022 Shooting Stars, the photojournalists who tell our stories through photos and video. That list is slightly more diverse, but we’re not there yet. We will continue to cast a wider net, to look to include more people of color and to work with organizations like The Diversity Pledge Institute who partners with us on our monthly Diversity Spotlight columns and our diversity vertical on our website. I welcome all of you who care about diversity in our industry to help us be better. No amount of effort will ever be enough, in my opinion, but we must keep striving together and moving forward.

As always, I welcome your comments. We can’t do this without your help.

Robin Blinder is E&P's associate publisher and vice president of content. She has been with E&P for two years. She can be reached at robin@editorandpublisher.com.

A season of gratitude

What is your commitment?

The 2020-2021 Pulitzer Prize awards ceremony
Following a long interregnum stemming from the COVID-19 pandemic, the 2020 and 2021 classes of Pulitzer Prize winners gathered at Columbia University's Low Library on June 25 for a ceremony celebrating their awards.
Twitter is the go-to social media site for U.S. journalists, but not for the public
Around seven-in-ten U.S. journalists (69%) say it is the social media site they use most or second most for their job.